History of ADA: How Far We’ve Come & How Far We Have To Go 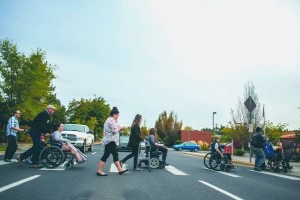 The Americans With Disabilities or ADA has been in effect for over 25 years. We, as people with or without a disability, have come a long way in making life more “accessible” for people with a disability. There have been guidelines put in place and laws created that help to ensure a more accessible America …but, there is far more that needs to be changed and preferably at a faster rate than the last 25 years.

Since the mid 1900’s, people with disabilities have pushed for recognition, to be viewed as an individual and not have their disability define who the are as a person.

People with disabilities have battled with stigmatism, irrational fears, and harmful stereotypes that resulted in oppression, pity, ridicule, poverty, inability to contribute to society, and even viewed as entertainment for circus acts.  Our first President with a disability, Franklin D. Roosevelt, was an advocate for the “rehabilitation of people with disabilities” but still had the view that a disability was an abnormal, shameful condition that should be “fixed” or medically cured.

By the 1940’s and 1950’s veterans who were disabled started demanding that the government provide rehabilitation and vocational training, which brought more visibility and concern for the long-term welfare of those who sacrificed for the safety of the United States. Despite these initial efforts towards independence, people with disabilities still didn’t have access to public transportation, telephones, bathrooms, stores, buildings and work due to stairs and other physical barriers. Employer’s attitudes created more barriers for talented and eligible workers when people with disabilities were essentially denied access to meaningful work.

In the 1960’s the civil rights movement began and disability advocates saw an opportunity to join in with other minority groups and the demand for equal access and opportunity began to take shape. People with disabilities struggled to challenge negative attitudes and stereotypes. They rallied for political and institutional change by lobbying for the minority community of people with disabilities.

Disability rights activists started a grassroots movement at the local level, demanding national initiatives to address these physical and social barriers. Parents of children with disabilities started demanding that their children be deinstitutionalized and removed from asylums so they could have the opportunity to attend schools, be included and engage socially with children who were not disabled.

ADA – The Americans With Disabilities Act:

The ADA was signed into law on July 26, 1990 on the South Lawn at the White House. But as you can see the ADA story began many years ago through the struggles and determination of people with disabilities who fought to have their voices heard.

The ADA’s birthright is not owed to any one person, or a few people, it took thousands of people working together to put the movement into law. People worked for years organizing protests, lobbying, drafting legislation, testifying, filing lawsuits, being arrested, negotiating, doing whatever they could for a cause they believed in. If not for the commitment, contribution and hard work, even something as small as licking an envelope, the ADA would not exist today.

The NCIL emphasizes that people with disabilities are the best experts on their own needs, with crucial and valuable perspectives to contribute to society and deserving of equal opportunity to decide how to live, work and take part in their communities. For more information visit NCIL

WE STILL HAVE MUCH MORE TO ACCOMPLISH:

Although the independent living movement has made great strides, the ADA still has a long road ahead. Barriers to inclusion still exist, language in reference to people with disabilities need to change, stigmas and stereotypes are still present, and accessibility is far from acceptable. With the invention of the internet and technology many more advancements are needed. As an ever- growing group, we have established that people with disabilities will keep fighting for our civil rights. In the meantime, websites like Blue-Path.org will provide people with disabilities access to businesses that are fully accessible. And it will provide businesses with the tools they need to become more accessible.

With the 26th anniversary of the ADA looming on the horizon, the ADA Legacy Projects works to Preserve, Celebrate, and Educate. A nationwide tour will culminated in a celebration on July 26-28, 2015 in Washington DC. “We envision a world in which all people are accepted and valued for who and how they are: where all are welcomed with respect and given equal opportunities to contribute to the human experience. The mission of The ADA Legacy Project is to honor the contributions of people with disabilities and their allies by:

Preserving the history of the disability rights movement.

Celebrating its milestones; and Educating the public and future advocates” for it is they who will carry the torch for the next 25 years.